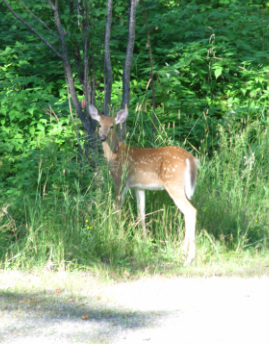 A striking example of human-mediated environmental change is seen in the recent increase in white-tailed deer populations on a large regional scale. We have established long-term replicated deer exclosure and control plots at Trillium Trail Wildflower Reserve (left). Instead of just measuring abundance, we are directly quantifying the plant responses to intense deer pressure (both direct and indirect effects) by examining how deer alter the vital rates seven species in the herbaceous understory community using demographic analyses. Six native species are represented in our study including three perennial palatable species (Trillium erectum (below), Smilacina racemosa, Polygonatum biflorum, two unpalatable perennial species (Hydrophyllum virginianum and Arisaema triphyllum) and one annual species (Floerkia proserpinacoides). We have also included two invasive species in our study: Alliaria petiolata and Microstegium viminium. We are conducting life table response experimental analyses Elucidating plant responses is central to understanding the potential recovery, persistence and/or decline of plant species within their communities and of the communities themselves. Two key results are detailed below. 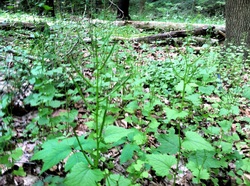 Generalist herbivore facilitates invasion success: Our recent analyses demonstrate that deer facilitate the population growth rate and invasion of the forest understory communities by Alliaria petiolata (right) in the control plots. Further, the exclusion of deer reverses this process. Population growth rate (lambda) of A. petiolata in the presence of deer is significantly higher than in the plots where deer are excluded. Our data provide the first empirical evidence that directly link deer with the demographic responses and invasive spread of A. petiolata in forest understory communities. Unpalatable native species decline in the presence of deer. 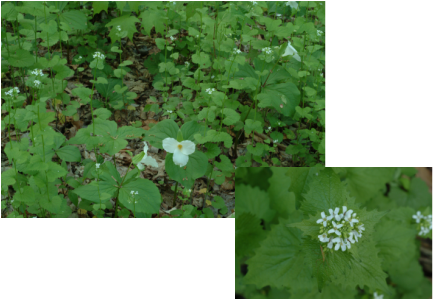 Unpalatable species are predicted to increase in frequency or even replace palatable species in communities where generalist herbivore pressure is high. Surprisingly, we find that common unpalatable native perennial species have significantly declined in abundance and individual plant size in the deer access plots, in a magnitude similar to the negative effects observed for our focal palatable species. We are currently investigating the mechanistic basis of these declines including indirect effects of deer, effects of invaders or a combination of these factors.