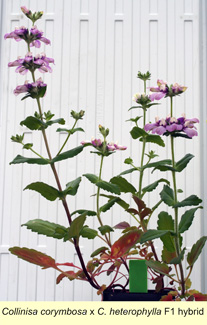 Elucidating evolutionary processes that lead to the origin and maintenance of new species is of paramount importance for understanding the diversity of life on earth. Speciation, the process by which distinct lineages arise, is fundamentally related to the formation of isolating barriers. Thus better understand the process of speciation one must understand the evolution of isolating barriers. We are simultaneously testing two prominent hypotheses related to the evolution of isolating barriers among closely related species in a monophyletic group of annual plants, Collinsia. First, we are testing the Dobzhansky-Muller (D-M) model of speciation by asking if the strength of postzygotic isolation among species is positively correlated with divergence time. Second, because our analyses suggest that many Collinsia species diverged in allopatry, but are now found in sympatry, we are testing for reinforcement of reproductive barriers in sympatry. Specifically, we are asking if prezygotic isolating barriers are greater between sympatric species of Collinsia than between allopatric species.