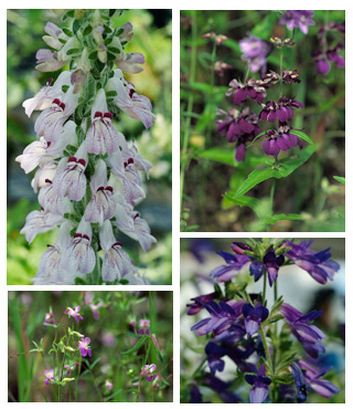 We are investigating phenotypic, genetic, and ecological factors that influence mating system evolution. In particular, we are testing the extent to which selfing is an evolutionary dead end, exploring the developmental and phenotypic correlates of autonomous selfing, and the role of the pollinator environment and inbreeding depression on the expression of selfing rate.

Is selfing a dead-end? Conflicting hypotheses have been proposed to explain the evolution and maintenance of selfing strategies. One critical question is when outcrossing populations evolve to be selfing lineages, do they ultimately end in extinction? Or can outcrossing evolve from selfing across long-term evolutionary history? These questions remain unanswered. Resolving these issues is a primary goal of our research. We are focusing on the tribe Collinsieae, a diverse group of 23 self-compatible annual herbaceous species native to North America. In collaboration with Bruce Baldwin and Scott Armbruster, we have a well-resolved phylogeny based on the sequence variation in the nuclear gene CYCLOIDEA and ITS, ETS, cpDNA MK introns that provides a backbone for answering these questions. My lab has polymorphic microsatellite markers for all species in the genus. We are using these to estimate population level selfing rates for all species, and then map the mating system onto the phylogeny to test mating system evolution in this group. This project is collaborative with Bruce Baldwin and Scott Armbruster. 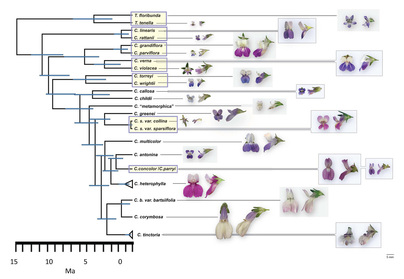 Can selfing vs. outbreeding strategies be reliably identified by floral traits thought to correlate with selfing? Flower size, display size, the timing of autonomous self-pollination or floral longevity are often used as correlates of selfing rate. We have grown all 24 species of Collinsia to flowering in the University of Pittsburgh’s Greenhouse Complex. Coupling floral shape and size analyses with measurements of floral developmental traits, we are assessing the floral phenotypic correlates of selfing and outcrossing in the genus Collinisa. These mating system data are being correlated with floral trait data and mapped on the phylogeny.

Under what ecological and genetic conditions does self-pollination evolve and create stable mixed mating?